Despite being several decades old, email is still one of the best ways to reach your readers, visitors, followers and customers. However, just like any other digital communication channel, you’re competing for attention. And one of the most important ways to grab that attention is through your email subject line.

In this post, we cover a whole bunch of things to think about (and action!) to get more eyes on your words.

01. Consider how you want your reader to feel

This may sound obvious, but in fact it’s often overlooked.

When people are writing emails, they’re generally thinking of it from what they themselves want to gain (e.g. clicks or sales), or are simply just describing what’s inside the email. These aren’t necessarily bad starting points, but you can also consciously factor in what emotions you’re looking to invoke in the recipient. This helps create a compelling reason to open your email (and take further action from there).

Many people are worried about the ethics of this, but it doesn’t have to be anything shady or manipulative. Maybe you want them to be excited or keen about a freebie/sale/new content, or curious, or empathetic, or in the mood to read a story or a journey-based long form email…or maybe something else entirely! As long as you’re not misleading people or overpromising, they

To make your subscribers happy, avoid overpromising or misleading, or targeting emotions like anxiety, panic or rage.

We’re not referring to SEO keywords or social media hashtags, but instead words that are likely to catch the eye of someone scrolling quickly through their busy email inbox.

The keywords that work best will depend entirely on your audience. Some people are more likely to stop for a particular word, for example if they see something they like such as “cats” or “sale.” For others it’s something that sounds intriguing, or “OMG” announcing. It may not even be a word at all, but an emoji or particular look to your subject line.

Knowing your audience well is important for this; some people may hate cats or are tired of sales emails. You won’t always be able to get it 100% right, but the feedback and analytics you have to work with can help you learn what’s hitting better with your audience.

03. Think about the context

The context your reader can be opening your email can have an impact on their reaction and behavior, and this applies to both the literal context and the broader figurative context.

For example, a mom quickly scrolling her phone while holding a baby is less likely to have the ability or motivation to read a long email, and despite best intentions may never get around to sitting and reading it in full.
Someone who is sitting at their desk with their email open all day is more likely to spot a “last chance – 2 hours left” type of email from you than someone who takes a break from the internet for a weekend to come back to several emails from you about a flash sale that’s already started and ended.

The broader picture is also important. Someone opening your email in a recession may see it very differently compared to if they opened it in a time of greater prosperity.

You don’t necessarily need to change what you’re doing, but it’s important to think about who your subscriber is, how they’re likely to spend their time, and how you can be sensitive and respectful of their situation. You want people to be able to identify with what you’re saying instead of rejecting it outright.

Side note: If you’re a Lyrical Host customer, we have a free download in the Resource Library called “Slice The Pie,” which is all about meeting people where they’re at and selling/promoting in an ethical, sensitive and helpful way during hard times.

What works for someone else’s audience may not work for yours. And if you share some of the same audience, it’s going to sound familiar to them to say the least. Sometimes it can even be seriously detrimental – for example you don’t want to copy someone’s idea of using profanity in your subject line or email, as it will often see your email automatically designated to the junk folder.

To avoid inadvertent copying, create from a structure- and goal-first position rather than using other people’s subject lines or copy and paste templates as your inspiration.

It’s always good to test a wide variety of subject lines to see what works best for your audience.

05. See your name/email as part of your subject line

A lot of people only think about what’s in the title box, and forget to review their sender name or email address.

Sending an email from Marketing@YourDomainName sets a different tone to YourName@YourDomainName – especially if your subject line feels very personal but your name/email is quite formal (or vice versa).

It’s also a good time to check that it’s your actual name being displayed (i.e. not “Mail,” “Postmaster” or “No-Reply”) and there are no typos (e.g. “courtney” instead of “Courtney.” or “AcmeLaserCompany” instead of “Acme Laser Company”).

People are particularly sensitive to typos when it comes to their email inbox as it’s a classic way to decide whether an email may be suspicious/spam or not.

You could even experiment with making your name more “brandable,” which not only makes it more recognizable but also makes it easier to search for and people may be less likely to fall for emails from people who aren’t you. For example, my name is set to “Jenni at Lyrical Host,” but you could use adjectives or a nickname – just don’t make it too long!

06. Know when to meet expectations and when to break convention

If you’re offering people a “birthday gift” in your subject line and your email body reveals it to be a discount code, some readers may be disappointed that there’s no actual gift. However, an unexpected free digital resource or a limited edition free birthday gift with a purchase can have the opposite effect.

In some situations, standing out from the crowd is a huge asset. If you’re sending emails with the subject line “Black Friday Sale,” your email is likely to be lost in a sea of other similar subject lines. Some people may even have an automatic filter set up to send email subject lines containing those words to another folder. But thinking outside the box and having a totally different angle in your subject line increases the likelihood you’ll stand out for the right reasons.

One of the easiest ways to find out what your audience likes is simply to ask them. (If you don’t have an audience yet, find where your target reader hangs out online and poll them there).

Keep your questions easy and close-ended, and ask as few as possible. You’ll get more responses the easier they are to answer. For example, asking “What type of email subject lines do you like to read?” is likely to get fewer responses than a poll which asks people to pick their favorite from a handful of pre-written options.

Use this as a starting point and then work from your own data once you have enough in your email marketing dashboard.

08. Use data to see what works

You need to start somewhere, but once you have a few email subject lines under your belt, it’s time to start working off of the data you have. Even though open rate data is just an estimate these days due to various privacy policies, you can still use it as a rough base to work from, and other stats such as the click through rate will help you build up a bigger picture.

Related:  Blogging 101: How To Track Your Blog Stats & Analytics

Remember, you’re not comparing random industry rates or what people have said in a Facebook group. The answer to “what’s a good open/click through rate” (or any other metric) is better than your last. You’re trying to beat your own records.

Simply put, the larger your list, the lower your open rate/click through rates are likely to be…but that doesn’t mean you’re not doing well. This is why your own data and successes are the most important to benchmark against.

09. Put yourself in your reader’s shoes

We’ve touched on this a bit above in the context and emotion points, but it’s good to extend it to make sure you’re prioritizing the reader. It’s the path of least resistance in reaching your own goals too.

This might look like being more inclusive in your language, creating different email subject lines to meet different cultural expectations (even within the same language, some countries/cultures are much more “salesy” than others), sending multiple emails to remind people who are easily distracted, or adding/avoiding emojis.
One common mistake people make in their emails is that they create a scenario and then assume everyone is in that exact situation. For example, if your email is all about how my biggest business struggle is getting more customers and how you can help, it’s instantly irrelevant to me if my problem is actually that I can’t hire enough employees to deal with all the leads and new customers I already have. Not only is it not relevant to me, I may even be annoyed or offended that you’ve made that assumption. Again, it comes down to your target audience and their reality and expectations.

It may sound kind of meta, but you also want to think about how your reader is likely to see you. For example, if you’re an aspirational figure to them, in a “I want what she’s got,” kind of way, writing about your luxury travel trip or new expensive home is likely to go down better than if you’re a relatable figure to them. As a relatable figure, this kind of approach can do more harm than good as people are likely to be looking for someone to empathize with or get instantly actionable advice/recommendations from.

It’s often the easiest thing to drop off your to do list, but never underestimate how powerful testing for yourself can be.

Many email marketing providers give you the ability to A/B test your subject lines to see which come out on top.

They often also provide the facility to resend your email to subscribers who haven’t opened it. Interestingly our email marketing provider advised sending it with the same subject line. However, in testing it, we found that people were more likely to open it the second time with a different subject line. It gave us the opportunity to try something different, and if the recipient hadn’t opened it the first time anyway, they didn’t know it had the same content.

This highlights how important it is to be open to advice and statistics, but run your own tests and review your own outcomes – your mileage may vary! 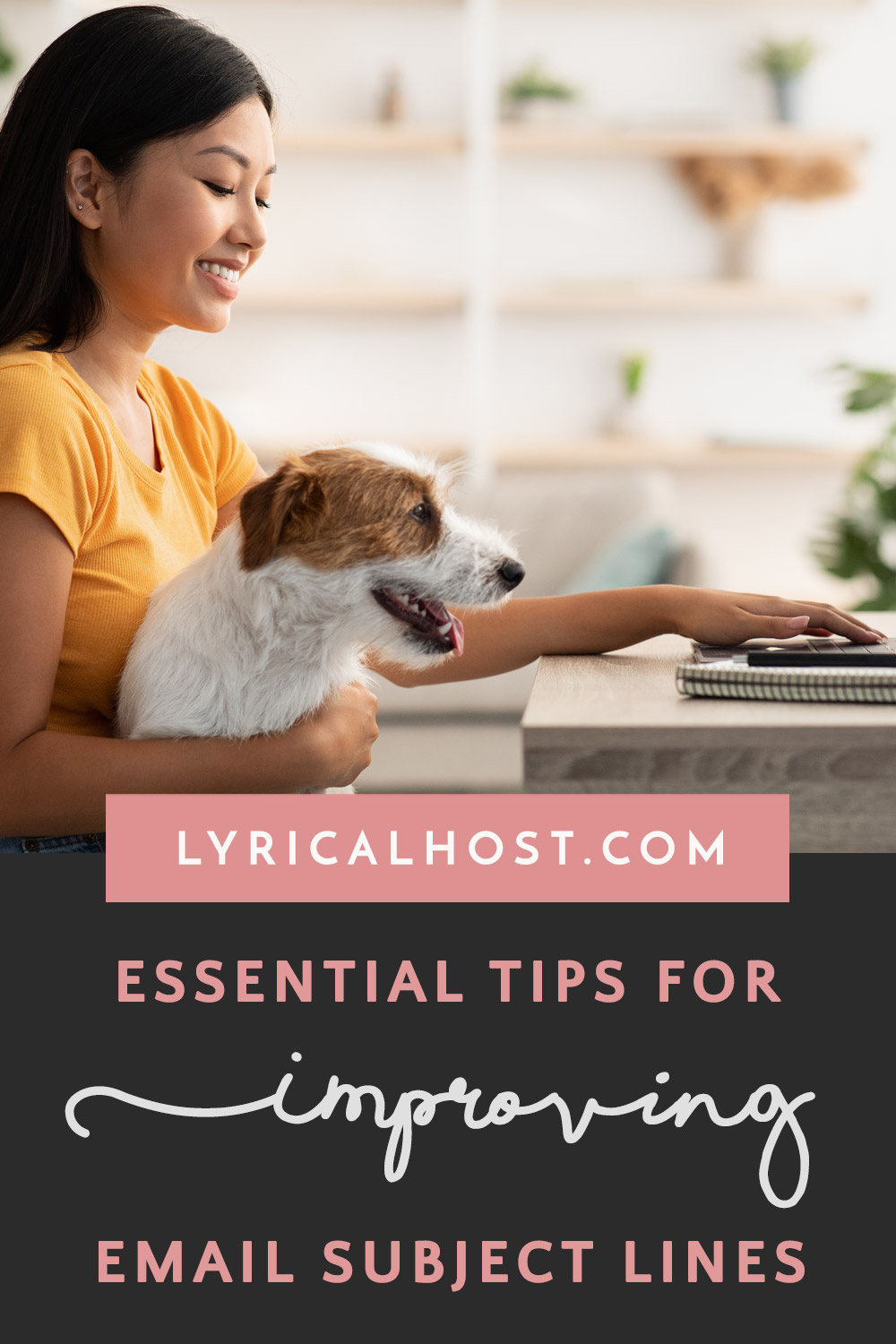 How To Check & Clean Up Broken Links In WordPress

How Bandwidth Is Calculated (A Guide For Bloggers & Small Businesses)

What Is Microcopy? A Guide For Bloggers & Businesses [+ Tips!]